The Monumental Bronze Company of Bridgeport, CT produced sand cast zinc grave markers (sold as "White Bronze") from 1874 to 1914. The company's product is in cemeteries from coast to coast both in the United States and Canada. Usually there are just two or three examples in a cemetery, if any at all. Mt. Hope Cemetery has 12 burial sites that are marked with zinc. The map below shows these locations.

Zinc grave markers stand out in a field of stone markers because of their characteristic blue gray color. After the markers sections were cast and assembled, they were sandblasted to roughen the surface, then treated with a metal finishing process called "steam bluing" which consists of covering the surface with a thin film of linseed oil, then hitting the surface with steam under a minimum pressure of 50 pounds per square inch.

The metal is nearly 100% pure. It weathers very well, and monuments made from zinc frequently look as good today as they did when they were first installed. They age better than marble, and are equal to the lasting qualities of granite. The markers were sold with the claim that they would last a long time, were about 1/3 less expensive than an equivalent marker carved from stone, and were modern and progressive. Their disadvantage is that zinc is brittle so the markers can be broken. Also, over time, large markers "creep" (sag), and so require an internal structure to support them.

Most of the markers have bolt-on panels so that an older monument could be kept up-to-date with newer burials. The panels themselves were made through 1939. A special tool, looking vaguely like a screwdriver but with a negative rosette bolt head where the end of the screwdriver blade would be, was used to loosen and tighten the cast zinc nuts.

*In the "Photo Gallery " of this website is a photo album and descriptions of the zinc grave markers at Mount Hope Cemetery. 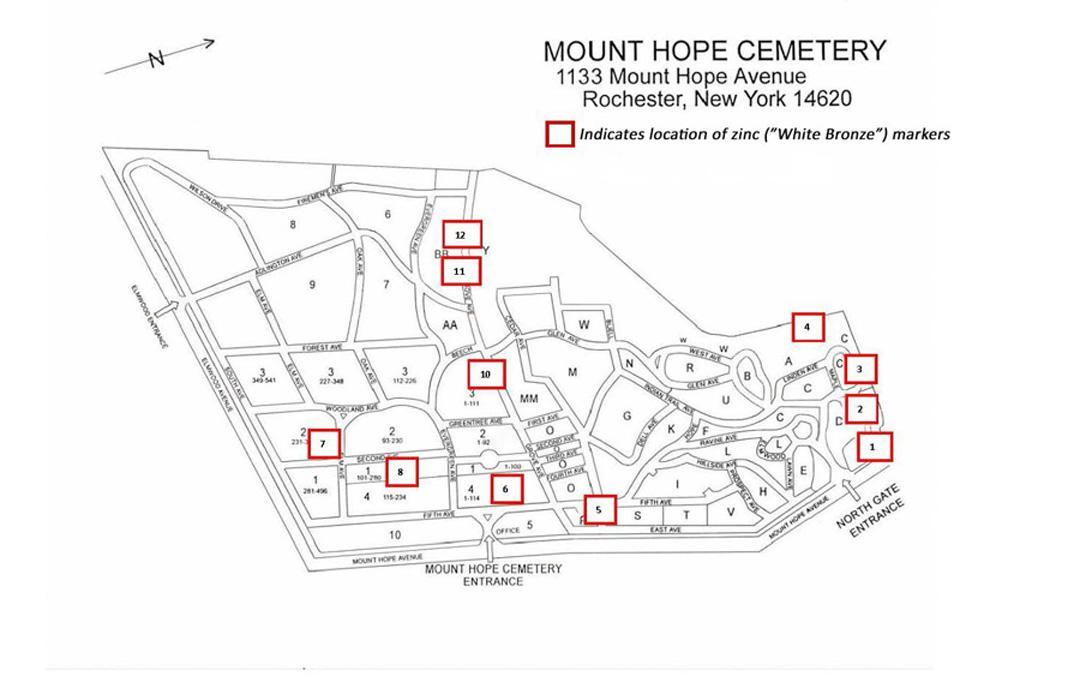